TORONTO, Sept. 16, 2018 /CNW/ - RNC Minerals (TSX: RNX) ("RNC"), is pleased to announce that it has doubled the strike length of this high grade coarse gold structure, to approximately 10 metres, after restarting development in the new high grade gold discovery area "Fathers Day Vein" at its Beta Hunt Mine in Australia (see RNC news release dated September 9, 2018). Airleg development towards the initial discovery area intersected the structure last Friday and the break through into the original discovery area is expected today. A 43kg specimen stone containing an estimated 1,100 ounces of gold and a second 7kg specimen containing 190 ounces was recovered from this most recent development. An updated estimate of ounces from the Fathers Day Vein is expected to be provided later this week after final outturns from last week's shipments to the Perth Mint have been received and initial estimates from the recovery and shipment of coarse gold and specimen stones from the most recent development are completed. Final numbers from this most recent development should be known within 2 weeks once all processing by the Perth Mint has been completed.

"The Fathers Day Vein delivers additional gold and cash flow from this further extension with additional potential up-dip still to be developed. I am looking forward to the production estimates incorporating these additional ounces expected later this week. The Beta Hunt team has done a great job moving the operation forward over the last 12 months and I congratulate every person working at Beta Hunt for the incredible Fathers Day Vein discovery last week. RNC is currently developing plans to unlock the high-grade gold potential of the mine which remains largely unexplored." said Mark Selby, President and CEO of RNC.

Airleg development resumed last week and began driving towards the current face on the left side of the initial discovery area (see Figure 1) and intersected the structure last Friday (September 14, 2018) effectively doubling the strike length of the high grade coarse gold structure. The structure remains open up dip with a substantial amount of coarse gold remaining in the face (see Figure 2) 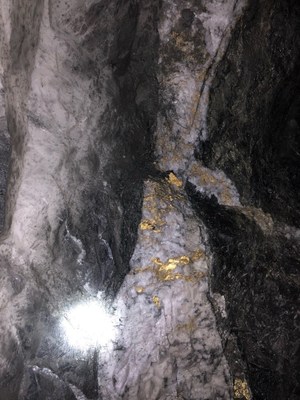 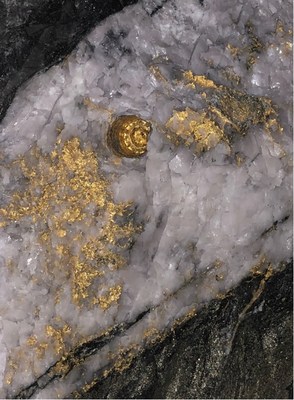 This discovery was made on Father's Day in Australia and has been named the "Fathers Day Vein".

Based on diamond drilling and underground mapping, there are two or more Lunnon sediment bands which are a zone of narrow (< 0.3m), strongly pyritic black shale horizons positioned approximately 150m stratigraphically below the Lunnon Basalt/Kambalda Komatiite nickel contact (see Figure 2 below).  This sediment horizon is well documented in published literature and is recognized as a marker unit in differentiating the Upper and Lower Lunnon Basalt. The sediment horizon is now also interpreted by geologists at the Beta Hunt Mine as a zone of chemical interaction between the gold bearing fluids and pyritic sulfides, which under the right conditions, allow large gold crystal growth and extremely high-grade gold deposition.  This interpretation is based on geological mapping and interpretation of structures on 14 and 15 Levels, where 1,500 oz of specimen gold was discovered and mined in the second and third quarter. The structure found last week is located in a dilation zone which contains sheared pyritic sediments, porphyry and Lunnon basalt and large amount of coarse gold and specimen stone.

Understanding the depositional model for this new gold mineralization provides potential for future exploration and discovery of high grade gold material at the sediment marker layer, which runs along all known shear structures located at Beta Hunt Mine. 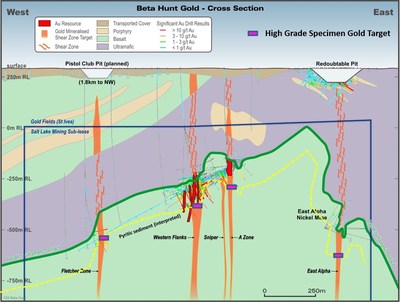 The Lunnon Basalt contains a subaqueous sediment horizon which well documented in published literature and is recognized as a marker unit in differentiating the Upper and Lower Lunnon Basalt. Whereas the Upper has lower MgO content than the Lower sequence. The sediment horizon is now also interpreted by geologists at the Beta Hunt Mine as a zone of chemical interaction between the gold bearing fluids and pyritic sulfides, which under the right conditions, allow large gold crystal growth and extremely high-grade gold deposition. Understanding the depositional model for this new gold mineralization provides potential for a completely new level of high grade gold specimen stone to be discovered.

This interpretation is based on geological mapping and interpretation of structures on 14 and 15 Levels, where 1,500 oz of specimen gold was discovered and mined in Q2/Q3. The structure found in early September is located in a dilation zone which contains sheared pyritic sediments, porphyry and Lunnon basalt and a large amount of coarse gold and specimen stone. This underlines the potential of future exploration and discovery of coarse gold material grading in several ounces per tonne. The sediment marker layer, which runs along all known shear structures located at Beta Hunt Mine, provide significant exploration potential in the near future.

About RNC Minerals
RNC is a multi-asset mineral resource company with a portfolio of gold production and nickel, cobalt, assets and exploration properties. RNC has a 100% interest in the producing Beta Hunt gold and nickel mine located in Western Australia where a significant high grade gold discovery was recently made. RNC also has a 28% interest in a nickel joint venture that owns the Dumont Nickel-Cobalt Project located in the Abitibi region of Quebec which contains the second largest nickel reserve and eighth largest cobalt reserve in the world. RNC owns a 35% interest in Orford Mining Corporation, a mineral explorer focused on highly prospective and underexplored areas of Northern Quebec and the U.S. Carolina Gold Belt. RNC has a strong management team and Board with over 100 years of mining experience at Inco and Falconbridge. RNC's common shares trade on the TSX under the symbol RNX. RNC shares also trade on the OTCQX market under the symbol RNKLF.